If you’ve never had nduja, you’ve been missing out because it’s the fire. And that’s not just a Metropole joke. The traditional Italian salumi mixed with herbs and spicy Calabrian red peppers adds the perfect edge to this more-or-less traditional stuffing recipe. Why bother fooling around too much with a Thanksgiving favorite? This one hits just the right notes with plenty of butter, garlic, lemon and thyme and the addition of nduja for a spark of that la passione.

How to Make It

In a large skillet over medium heat, cook the sausage, breaking it up and stirring frequently. Remove to paper towels to drain.

Wipe out the skillet and melt the butter over medium-low heat. Add the onion, fennel, and celery and cook, stirring, until the vegetables are softened, about 5 to 7 minutes. Add garlic, cook for 2 more minutes.

In a large mixing bowl, toss the bread cubes with the herbs and seasonings. Add the vegetables with the butter and the drained sausage. Stir in chicken broth until well moistened, but not mushy. Pack gently into the prepared baking dish and cover it tightly with foil.

Bake for 25 minutes. Remove the foil and broil for about 3 to 4 minutes or just until browned on top. 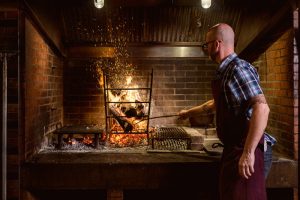